Footbar Easels and How They Benefit Your Company

A cost-effective and reliable easel is the perfect way for companies and teams to get on the same page through visual aids, but finding one in today’s market can be a difficult task. However, there’s one particular model of easel that gives you the reliability and rigidness of a traditional A-frame without the high cost.

Your company needs a premium aluminum footbar easel, and we’re here to explain how it works, how it will benefit your business, and who the footbar easel will suit best.

Let’s get into the details without further delay.

What is a Footbar Easel?

A footbar easel isn’t very different from the A-frame easels you’ve likely seen painters use. It has the same general setup, but the rear frame is a single rod that is carefully balanced to maintain sturdiness while reducing the weight and cost of the overall unit. The front frame, which houses the whiteboard or material holding surface, is comprised of a bent bar that forms a squared “U” shape against the ground. This design reduces the weight of the easel, and it requires fewer materials to manufacture; reducing the cost dramatically.

What are the Benefits of a Footbar Easel?

A footbar easel shares many of the same benefits as a traditional A-frame easel. It’s sturdy, capable of holding larger, heavier, materials with ease, and some models come outfitted with a built-in whiteboard. However, it also reduces the weight, cost, and clunkiness of a traditional A-frame easel. This is due to the simple rod-style back support with a one-piece “U” shaped front frame. This gives you almost the same capabilities as an A-frame easel but in a lighter, cheaper package.

What are the Cons of a Footbar Easel?

Who is the Footbar Easel For?

A footbar easel will best suit businesses that use visual aids on poster boards and other larger materials, but also need a whiteboard and mobility. While a footbar easel can’t perform every task very well, it can do enough to work well with companies on a budget due to its low cost and high flexibility.

However, a footbar easel isn’t a good choice if you plan on moving your easel throughout business meetings or using it to display very heavy materials. For that, you’ll be better served by an A-frame or Vario Mobile Easel.

Get Your Footbar Easel from FlipChartsDirect

Your company needs an easel to display important visual aids during meetings. This aids in helping your team understand what’s happening and what needs to happen, collaborate while strategizing, and overall, act as one cohesive unit.

With such crucial elements at play, you need an easel you can trust to work its best every time you need it. FlipChartsDirect can provide you with the footbar easel you need to handle everything your business needs, and we also provide a large selection of other flipcharts such as A-frames and mobile units.

Browse our selection today for a product you can trust. 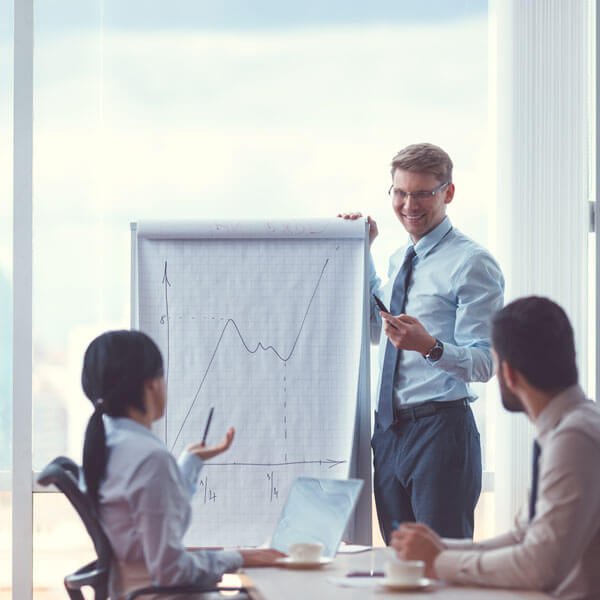 We offer a range of flipchart easels to meet your needs that have proven to stand the test of time. Ideal for use in any conference, meeting room, classroom or office we offer a range of products from lightweight, adjustable, folding or mobile with several that are easy to store and transport.

We use cookies on our website to give you the most relevant experience by remembering your preferences and repeat visits. By clicking “Accept All”, you consent to the use of ALL the cookies. However, you may visit "Cookie Settings" to provide a controlled consent.
Cookie SettingsAccept All
Manage consent

This website uses cookies to improve your experience while you navigate through the website. Out of these, the cookies that are categorized as necessary are stored on your browser as they are essential for the working of basic functionalities of the website. We also use third-party cookies that help us analyze and understand how you use this website. These cookies will be stored in your browser only with your consent. You also have the option to opt-out of these cookies. But opting out of some of these cookies may affect your browsing experience.
Necessary Always Enabled
Necessary cookies are absolutely essential for the website to function properly. These cookies ensure basic functionalities and security features of the website, anonymously.
Functional
Functional cookies help to perform certain functionalities like sharing the content of the website on social media platforms, collect feedbacks, and other third-party features.
Performance
Performance cookies are used to understand and analyze the key performance indexes of the website which helps in delivering a better user experience for the visitors.
Analytics
Analytical cookies are used to understand how visitors interact with the website. These cookies help provide information on metrics the number of visitors, bounce rate, traffic source, etc.
Advertisement
Advertisement cookies are used to provide visitors with relevant ads and marketing campaigns. These cookies track visitors across websites and collect information to provide customized ads.
Others
Other uncategorized cookies are those that are being analyzed and have not been classified into a category as yet.
SAVE & ACCEPT
×
×